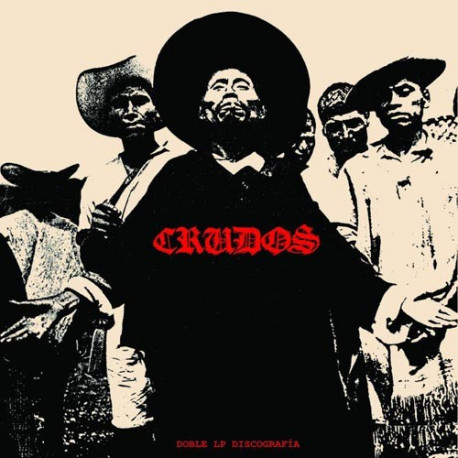 Finally a European version of the long overdue LOS CRUDOS Discography collection. LOS CRUDOS, formed in Chicago's Pilsen neighbourhood in the early 90's, are a Latino punk band with a strong socio-political message and an extremely militant DIY attitude. During their first incarnation, spanning the years 1991 to 1998 the band self-released their own records, printed their own merch, booked their own shows and toured relentlessly around the world. From South America to Japan including a 3 month European tour in the winter of 1996. They spoke to the freaks the outsiders and the minorities and were not afraid of confronting the white middle class punk who reigned supreme during the terrible 90's. A time which will not be remembered for their hardcore output except for a few exceptions, in which CRUDOS are surely included. Their sound, far from being a copycat of whatever flavour of the month was reigning at the time was heavy rooted in the golden years of European and Latino American ferocious hardcore punk. With bands as IMPACT, WRETCHED, OLHO SECO, TERVEET KADET or MASACRE 68 as obvious influences in a time when the simple mention of any of those bands (or any non English speaking bands really) was usually met with a laugh or a joke. They sang in Spanish, with aggression and conviction and that made their message spread out widely, reaching thousands of Spanish speaking punks both in Latino America and Spain as well as inside USA where third generation Latino kids surely were missing a voice within the punk scene. The band split up in 1998 after a really intense year of touring and reformed in 2008. The band will be undertaking their first ever Scandinavian tour in July/ Agust 2016.
This collection, originally released as a benefit for MRR magazine last year, includes all the LOS CRUDOS output plus compilation tracks as well as a couple demo tracks and an unreleased song. The European version comes in a gatefold sleeve and brings a 40 page booklet with flyers and the lyrics of all songs.
(LA VIDA ES UN MUS)
https://lavidaesunmus.bandcamp.com/album/doble-lp-discograf-a

This product is no longer in stock